Subscribe to Tameri's Newsletter Today! Make sure you're always in the know and that you never miss a new release. Sign Up »
Sign Up
Skip to content
January Reader Appreciation Event!
The Temple of Ardyn is here and Kaldaar is free!

Cover Reveal ~ The Temple of Ardyn!

To say I'm excited for this book to come out would be an understatement of the highest magnitude.

I'm thrilled, I'm giddy, I'm over the moon elated THE TEMPLE OF ARDYN will be released later this month.

Book two in the Song of the Swords series is full of love, adventure, and betrayal. Taryn and Rhoane continue their quests to answer the riddle of the Shadow Assassin, while navigating the schemes of those who wish them harm. Readers of the first book will be happy to know Rhoane gets more action in this book, as well as major sexy time with Taryn. Finally! Later this year he'll have his own novella, but let's not get too far ahead of ourselves, shall we? Before he gets his own story, he must delve into the depths of darkness. Will he forsake the one he loves? Will one person's selfishness destroy his and Taryn's relationship? Will Taryn confront her brother and unlock her Dark powers?

So many questions! Those and more will be answered, with a few new ones to tickle your interest. I'm evil, I know. And you love it, admit it!

I promised a cover to reveal and now is the perfect time to do it. Without further pomp and circumstance, I give you, THE TEMPLE OF ARDYN!

Once again, Carol Phillips did an amazing job capturing the mood of this book. You can see all of her incredible artwork on her website ~ Radianceweb.com.

Here's the cover in its entirety, including the back cover art without the blurb: 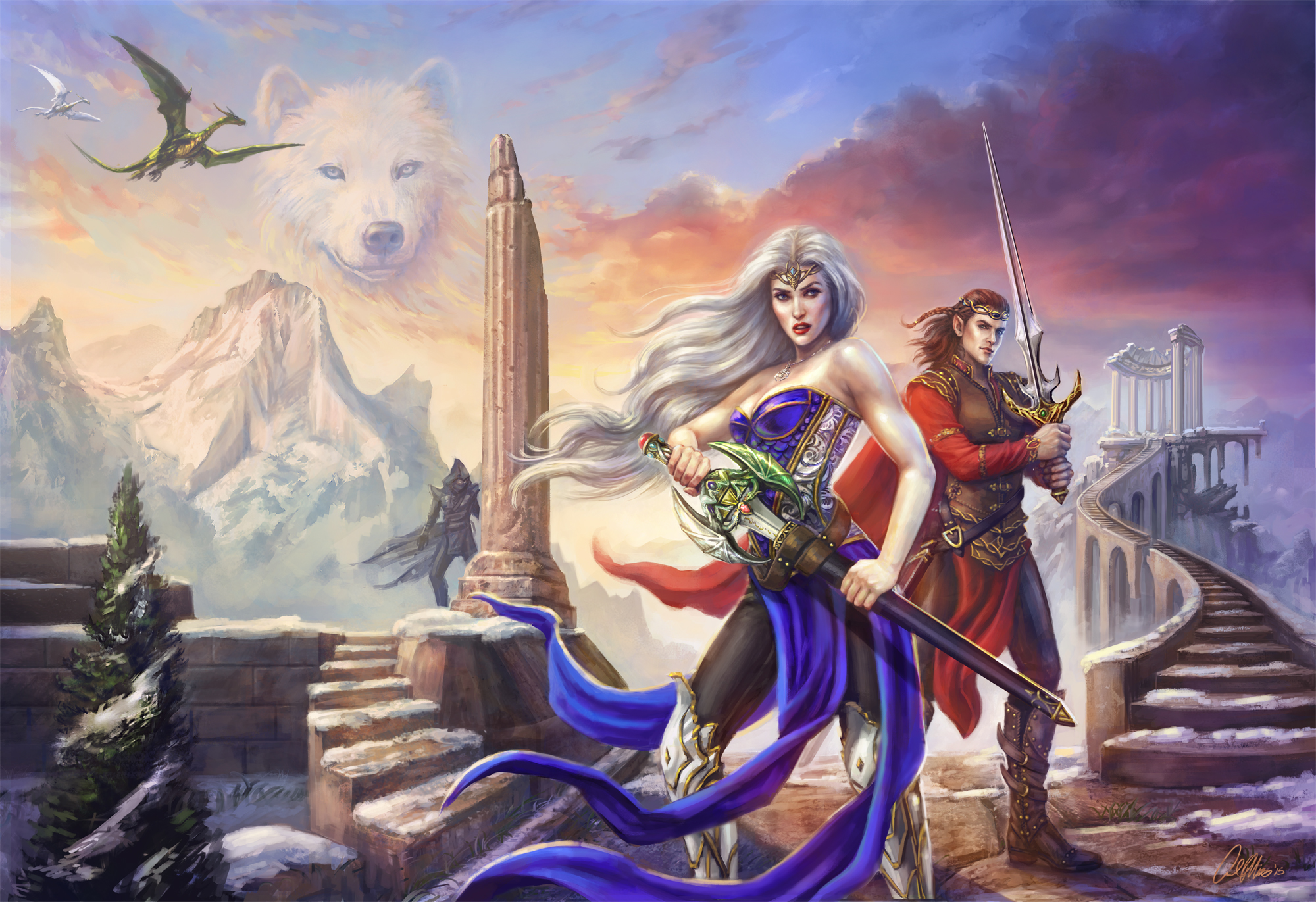 Awesome, right? Okay, I'll stop gushing now. Or not. I love this cover so very much. Can you see the dude hiding behind the pillar? That's the nasty Shadow Assassin—he's upped the danger and is out for Taryn's blood. He'll need to get in line! There's no shortage of people who want Taryn dead, including her own family.

Taryn banished the phantom, but someone, or something, is invading her thoughts. To escape the torture and bring balance to Aelinae, Taryn must do the one thing she fears most—unlock her Dark powers.

Rhoane swore an oath to protect Taryn, forsaking all others to keep her from harm, yet her independent spirit and lack of trust almost cost her life. Now, he’ll do what it takes to save the woman he loves from the Blackness growing inside her.

But there’s evil in this world, and it’s just as desperate for them to fail.

This is the second book in the Song of the Swords epic fantasy series about honor, family, and love—of what it takes to become someone you never thought you’d be and to find the strength to face your inner demons.

Pretty groovy, right? I can't wait until this book is available for you to read! Soon, my darlings, soon. We must be patient (so not my strong suit).

While we're waiting, how about checking out this fun interview I did for the San Diego chapter of Romance Writers of America? I'm giving up some secrets about the books… click here to be taken to the RWA SD blog. See you there!

I feel like the Wizard of Oz right about now. There are so many things going on behind the curtain that I want to share, but again, patience! Something I CAN share is this ~ I'll be at the California Dreamin' Conference from March 27-29. There's a public book signing on Sunday, March 29th from 2-4pm. If you're in Southern California, I hope you can stop by! There will be over 70 authors, including Sylvia Day and Vicky Dreiling! For more information, jump over to the CalDreamin' website here.

Have you signed up for my newsletter yet? You really should! Each month you'll receive news about the books, insider info no one else gets, cover reveals first, and super secret deals no one else will see. You know I love to spoil my readers! I also randomly draw names for cool giveaways. Sign up now, you won't be sorry! Click here to be a member of the Inner Sanctum, your place for all the insider news you'll love. Thank you!

Until next time, be amazing!

15 thoughts on “Cover Reveal ~ The Temple of Ardyn!”

January Reader Appreciation Event!
The Temple of Ardyn is here and Kaldaar is free!
View Privacy Policy
©2021 Tameri Etherton
Made with ♥ by Memphis McKay
up