Things are heating up on our flight! With Serena now within his grasp, what will Colton do with her?

If you missed parts one and two, go ahead and catch up before reading today's entry. Recline your seat, sip your favorite drink, and enjoy this week's installment of First Class: 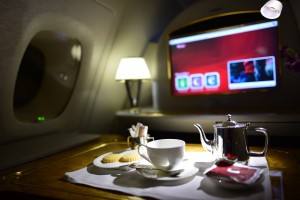 Colin
She was nuts. Plain as that. How the hell could someone tell from his carefully perfected, expensively attained speech that he was lying? Stuntwoman my ass. Amy probably sent her here as a spy. He’d never, in all the months he’d been with Amy, told her anything about his childhood. Of course she’d asked dozens of times, but he always had a quip or easy tangent to take them off the subject. It would be just like her to send someone, a pretty someone, to do her dirty work.

Now who was the crazy one? Believing his ex would do something as intelligent as send a spy. As if. She was only too happy to see the back of him this morning. Not only that, she wouldn’t have had the time to arrange for Serena to get on the flight. And how would Amy know he’d pick her to sit in his vacant seat?

This is what women did to men. They made them second-guess and come to ridiculous conclusions.

Serena shifted in her seat, facing forward once more, earbuds in place. Shit, he’d taken too long to respond. It was just as well. He didn’t feel like playing her game and fuck all if he would tell her anything about his childhood. Roll his ‘h’s and drop his ‘r’s. He glared at her hard, willing her to face him, but she reclined in her chair as if he didn’t exist. Fine.

He continued his solitary stand off, taking in the lines of her profile, the way her lashes fluttered against her cheeks. She might be sleeping, or messing with him, he didn’t care. There was something about this woman that infuriated him as much as she excited him. For a long time he simply watched her, counting the seconds between each breath, imagining the pleasure he could bring to her lips. She adjusted her position and turned her head to face him. Those gorgeous green eyes regarded him, questioning.

“I can't help myself.” A small smile crooked the corners of her lips. It was a start. “Do you really want to hear my story?” Where the hell had that come from? Shit.

Indecision flicked through his thoughts. He could make up a troubled past, feed her just enough to what? To get her to sleep with him? For some reason, he didn’t want that from her. Well, he did, but not only that. Yes, she stoked his curiosity, but no one was worth sharing his past. Not even beautiful, mysterious women. Hell, for all he knew, she might be a reporter from a tabloid who happened to get lucky when he upgraded her. Shit.

“I’d say you can trust me, but I have a feeling that’s hard for you.”

“Did you know there’s a code in first class? What happens here, or is said here, stays in first class. Never to be mentioned again.” She reached out and took his hand. Her long fingers stroked his knuckles.

The sensation went straight to his core, but for once, he didn’t think of how much he’d like to bang her. “Are you some sort of soul whisperer? You meet unsuspecting men in order to get them to confess their life story?” He’d meant it as a joke, but the words came out harsher than he’d intended.

“Quite the opposite, actually. Usually I don’t give a shit about someone’s angst. If I was smart, I’d be sleeping since I’ve got an early call tomorrow, but you intrigue me. I get the sense you need to tell someone your story and I’m very good at keeping secrets.”

Colton prided himself on being able to read people, but she confused him. Sincerity shone from her eyes, but there lurked something dark, too. Everyone had secrets and he suspected hers were just as camouflaged as his.

“I’ll make you a deal, for every parcel of information I feed you, I get something in return.”
She eyed him like he was a viper set to strike and she an apprentice snake charmer. “Like what? Because if you expect me to strip off a piece of clothing for every lie you might tell, forget it.”

“Strip?” he chuckled, “I hadn’t thought of that, but now that you mention it, we could play your way.” Her glare lacked any real conviction and he had the distinct impression she wouldn’t mind if he took off his clothing. This could be interesting, to say the least. “How about, one truth from me, a kiss from you.”

“A kiss? Like this?” she held his hand to her lips and pressed their warmth against his skin. That tiny bit of contact was like a jolt of electricity. Jesus, this woman was going to kill him at thirty thousand feet.

“Sure. Like that. Although, I think it only fair the harder the truths, the deeper the kiss.”
Her tongue snaked out to take his thumb in her mouth. Damn, she was good. Too good. Colton’s erection pressed against his trousers, uncomfortable, but he didn’t alter his position. The pain kept him alert and he had a feeling he’d need his senses sharp with this woman.

“I have a better idea,” she drawled around his thumb, “you tell me your life story and if I believe you, I’ll give you the name of the hotel I’m staying at. I’ll be in London a week.”

She was the devil. Had to be. What kind of offer was that? Not that he believed she’d go through with it. He’d tell her his sad little tale, then she’d find some reason not to sleep with him. He didn’t need this bullshit. Serena laced her fingers with his, her grip strong and sure. Devil or not, she was right, he wanted to confess his sins, tell her his sordid life story. As a dare to himself, he wasn’t sure. It would prove nothing and could quite possibly destroy everything he’d built, but part of him was tired of hiding. Tired of pretending. Serena provoked his emotions. Made him ache for the raw feeling of vulnerability.

That was a sure sign he couldn’t go through with it. He withdrew his hand from hers, a cold sneer on his lips. Somehow she’d gained control of the conversation and that just wouldn’t do.

“Sorry, darling. Tempting offer, but not one I’m willing to risk at the moment.”

He stretched his legs to get more comfortable and ignored the slight tilt to her head, the lift of her lips. She was studying him, like he was some fucking project she could fix. Well, not this time. With his work stashed in the briefcase in the overhead compartment, there was no way he was about to ask her to move to get it, so he leaned his head back and closed his eyes, trying to forget the way her hot little mouth felt on his thumb.

Darn that Colton! Here we were, all ready for some wicked fun, and he ruins it. Hmmm, I think Serena's getting to him a little more than he bargained for. Next week, it's Serena's turn. I hope she knows how to handle rejection because Colton just served her a heaping scoop of it.

Have a fabulous weekend, my lovelies! If you're doing something wicked and fun, share it with us! And, if you haven't already, go ahead and click Like on my Facebook author page. We keep the party going all week long. And if you really want to know the inside scoop before everyone else, sign up for my newsletter and join my reader group.

Until next time, be amazing!